In a previous life, I was a research biochemist. I organized, funded, and ran a small lab to investigate how complex biological systems, like a human being, regulate metabolism.  That gig lasted about 20 years. I bring it up now to highlight the context in which the idea of Cultural Synthase was grown and expressed. Dr. Okar was very much concerned with figuring out how particular enzymes accomplished catalysis. Elucidating the mechanism, he called it.

Enzymes intrigued Okar because he appreciated their ability to speed things up, cooperate, and organize into much larger superstructures that function in ways none of the individual enzymes could accomplish on their own. While there were fleeting moments when he doubted it, almost every scientific peer he spoke with agreed that proteins and enzymes were inanimate. It was clear that these molecules had no thoughts, emotions, or desires. It comforted him to know that even inanimate, unfeeling, brainless bits of matter could manage to create something bigger than themselves, and it worked. A few years back, a team lead by Luis Fortune cast an abandoned ant colony in 10 tons of concrete and dug it up after letting it set. The colony is a stunning piece of architecture and functional design. I’m pretty sure that the colony was of leaf cutter ants. Leaf cutters eat a particular mold cultivated on the bits of green leaves the workers cut and collect in underground piles. Essentially, the ants use the piles of wet, green, leaves as farmland to grow fungi crops and feed the colony. Because the ant’s fungi farm is an underground operation, good ventilation is essential because a lack of fresh air (anaerobic conditions) favors the growth of molds that will kill off the crop. Worker ants inoculate fresh leaves, turn older piles, harvest the produce, and remove the waste. The colony has effectively engineered a farm-to-table agricultural system that is fully integrated into the sanitation system and can support an entire colony while it constructs a massive underground metropolis. All without a single developed brain between them! 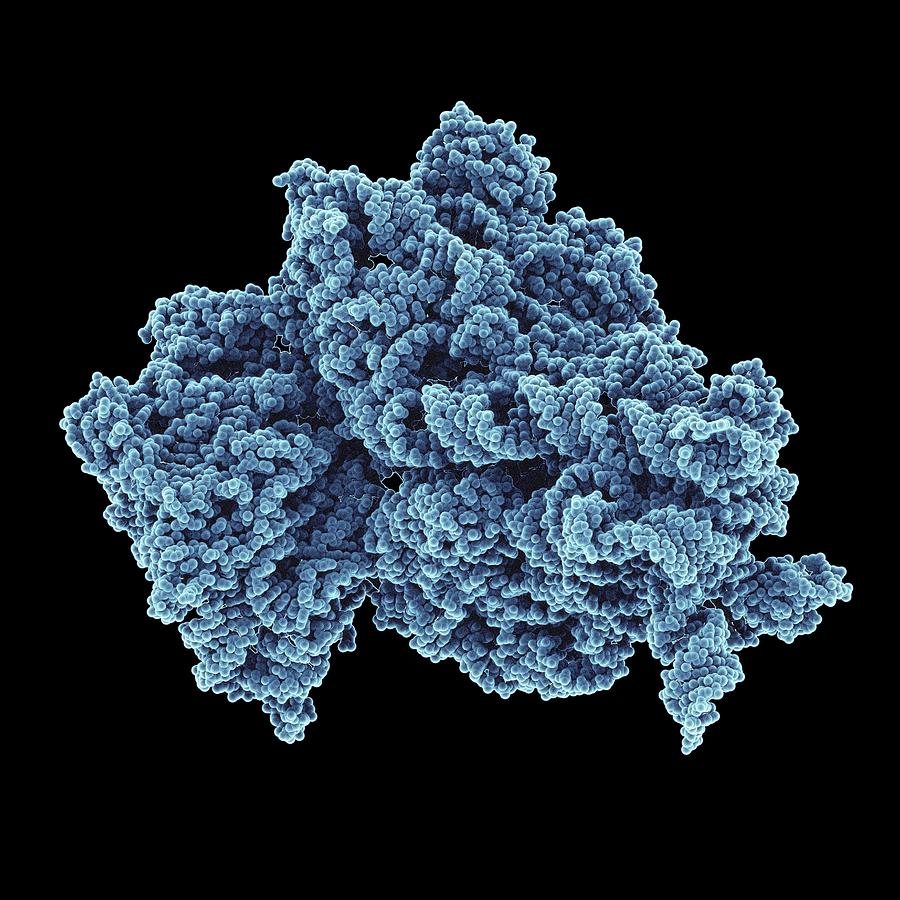 Molecular structure of a ribosome.

At first, learning about ant and bee societies fascinated Dave because of their design prowess and complex social structures. Before long, he was looking to the social insects for clues about how complex enzymatic systems accomplished metabolic regulation. It struck him that each ant could be thought of as an enzyme. Although the typical ant is a far more complex structure than any really, really big multi-enzyme machines like a ribozome or the nuclear pore complex, they are active and speed up changes in the environment. Ants, like enzymes, must interact with others to accomplish their natural function. The way they interact determines the overall impact of their collective actions. I used to watch red ants for hours way back when. I’d give them tiny cookie crumbs and those ants would drag it down into the colony. All the while, a few ants would be tugging the morsel backwards, or in some direction other than toward their lair. It was so unlike a team of horses pulling a wagon, that it blew my mammalian mind. What Okar did not notice during his play with the ant colony, but came to appreciate years later, is that the closer the crumb got to the hive entrance, the fewer ants tugged backward or askew. It was as if the colony had learned to cooperate and this accelerated them toward their collective goal. For me, that the little buggers accomplish this without thinking about it is the most hopeful and exciting part of the story.

Dave used to chuckle at the simple irony of the lesson. Where he had expected to find an analogy for enzymatic systems in the workings of a social insect hive, he instead found an understanding of societies in the workings of metabolic systems. Dr. Okar realized that humans are like enzymes, too. We are synthases. Cultural Synthase to be precise. We make culture just as surely as we make doo. It is part of being alive. There is an ant-like aspect to the cultures that humans build and how we manage to move stuff around. The insects are organized by chemicals, physical interaction, and rules for how to respond. Humans work in much the same way, but because we have a brain and a mind, we are also organized by symbols, trinkets, ideas, and beliefs. Even a brief review of the conflicts that characterize so much of human activity throughout every history, alternative or mainstream, and into today confirms that we respond predictably to advertising, propaganda, and theological scripts.

I take great comfort that humans have developed minds because with it comes the potential to look backward and think forward. Humans are distinct from ants and enzymes in that we can examine our histories for clues to help us imagine the futures we’d like to behold and avoid repeating old mistakes. Each of us can redirect our ant-like tendencies toward building the culture we imagine, not only the one encoded by the natural history of the chemicals from which we were synthesized. It took a couple billion years for the head on your shoulders to evolve. Use it. Embrace the Cultural Synthase activity that you express and put it to work building the future you imagine. Never mind those pulling away from the goal and depend on our ant nature to keep us on track. Remember that we are a part of the same natural cycles that taught ants, bees, and mole rats how to survive. Trust the Earth to teach humans the same lessons and create a culture grounded in the history of this planet.